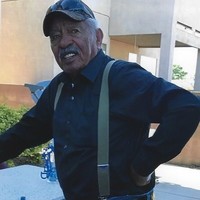 Lorenzo was born on January 23, 1938 in Tecolote, NM to the late Guadalupe Pacheco and the late Floripa (Garcia) Pacheco.

He was a member of Our Lady of Sorrows Parish. He retired from the Santa Fe Railroad after 35 years of service and enjoyed 20 years of retirement looking after his animals and his dog Sugar.

Rosary Devotional services will be conducted Tuesday, September 10, 2019 at 7:00 pm. Funeral mass will be held on Wednesday, September 11, 2019 at 9:00 am with both services to be held at Our Lady of Sorrows Church with Father Rob Yaksich as celebrant. Interment will be held at Tecolote Cemetery in Tecolote, NM with the following serving as Pallbearers Larry Herrera II, Sammy Martinez II, Kenny Lucero, Jorge Gallardo II, Miguel Quinones, Marvin Trujillo, George Pacheco, Caco Pacheco. Honorary Pallbearers will be Moises Martinez, Omar Gallardo and Bobby Suazo.