In his newest book, Saints, Statues, and Stories: A Folklorist Looks at the Religious Art of Sonora (University of Arizona Press, 2019), folklorist “Big Jim” Griffith recounts nearly 60 years of travel through Sonora, Mexico, making sense of roadside shrines, artists, fiestas, saints, and other religious art found in the living traditions of Catholic communities. Such markers, Griffith believes, are not just art objects, but bridges of communication between the world of the living and what comes after. In this excerpt, Griffith describes the quemasantos, or saint burners, through the story of the famous composite statue of San Francisco in Magdalena, Sonora.

In many ways la persecución (the persecution) was a defining moment for twentieth-century Sonoran Catholicism, and ironically enough, this state-led effort of “defanatization” seems to have resulted in even stronger connections between Sonorans and their images. Virtually every practicing Catholic we interviewed gave us narratives referring to la persecución. Most of these accounts concerned the destruction or rescue of individual pieces of religious art, but occasionally we were given a broader view of this time when churches were closed, images burned, and Catholicism literally forced underground. One of our first interviews was with a woman in Ures, who said that she had lived on a ranch that was the site of clandestine Masses said by a priest who was in hiding in the mountains. The Blessed Sacrament was kept at her family’s house between visits. She told us of how wonderful it was to have Jesus always present in that time of trial. Not once did she mention the real dangers that this involved. As we consider the following narratives, it is important to realize that many of those who worked against government policies did so at considerable risk to themselves.

Bishop Juan Navarrete moved from Hermosillo to the sierra, where he established a clandestine seminary from which he would cross over into Arizona at any serious threat of a government raid. His energetic resistance has led to his cause for sainthood being taken up in Rome. We also heard of Padre Francisco Navarrete, the bishop’s younger brother, who hid among the people in the railway town of Empalme, near Guaymas. One day he appeared in workingman’s clothing at the site of a fatal accident, administered the last rites to the dying man, and disappeared into the crowd of onlookers. There is a chapel dedicated to this priest in the Guaymas cemetery. Like his brother the bishop, he is considered a saint by some Sonorans.

Despite the efforts of the faithful, many beloved images did not escape the quemasantos (saint burners). Perhaps the most famous case of such destruction involves the reclining statue of the composite San Francisco in Magdalena. I will treat this episode in some detail, as it incorporates many of the elements mentioned in previous chapters. 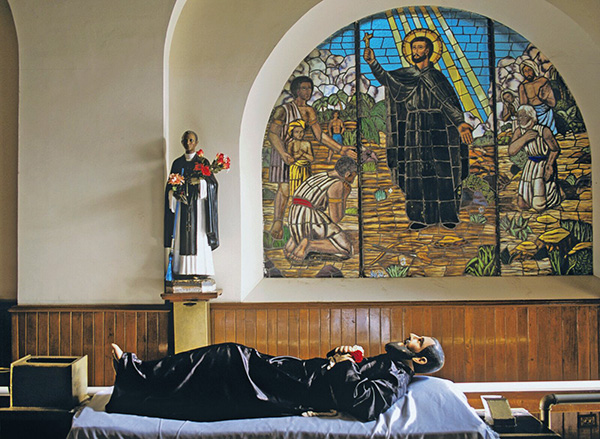 The reclining statue of the composite San Francisco in Magdalena

According to tradition, the original statue was brought to Magdalena by Father Eusebio Francisco Kino, SJ (1645– 1711), the first and most famous missionary to work in the Pimería Alta. He had intended it for the church that he planned to build at San Xavier del Bac, just south of present-day Tucson. When the statue arrived in Magdalena, however, it could not be moved, which was taken as a sign that the saint desired his image to remain there. Since at least the early nineteenth century, this statue had been the focus of pilgrimage and devotion. Currier and Ives and the great Mexican popular artist José Guadalupe Posada made widely distributed prints of it.

In 1935 the image was removed from the church by quemasantos, taken to the capital city of Hermosillo, and burned in the furnaces of the Cervecería Sonora (Sonora Brewery). This act is seen to have had serious consequences for many of those involved: a school teacher who danced on the ashes of a statue she had burned is said to have gone mad, and it was said that the furnace assistant fell ill with espanto (literally “fright”—a traditional sickness akin to shock) and died two weeks later (Bustamante Tapia 2006, 47–48). Others who helped in the act of desecration of the church are believed to have met with equally unpleasant and suitable ends.

Many of the faithful took the statue’s ashes away to their home altars. I have also been told that the saint did not allow his statue to be destroyed, but that the local priest gave it to faithful Papago Indians (now called Tohono O’odham), who carried it to one of their villages near the border, where a similar image remains today. An O’odham friend told me that, according to his mother, it rained during that journey, both as a blessing and to confuse the “Spanish soldiers.” Several years later, another statue—the one which is now in Magdalena— was created and installed. This replacement statue seems to possess all the powers of the original. (For a fuller account of aftermath of the statue’s destruction, see Griffith 1992, 50–54.)

This statue currently lies on an altar slab in a separate, recently built chapel beside the parish church. When people visit it, they usually try to raise its head off the slab where it rests. If this attempt is successful, it is taken as a sign of the saint’s favor; if not, there is a serious need for fence mending in the form of prayer, penance, or both. This penance can often take the form of a promise to perform some such act as wearing a habit or making a pilgrimage to the saint’s image. If the saint perceives that this promise is not being kept, however, he can visit revenge on the unfaithful supplicant, often in the form of fire. This has led to the often-repeated statement that San Francisco is a miraculous saint, but one who demands a payment. 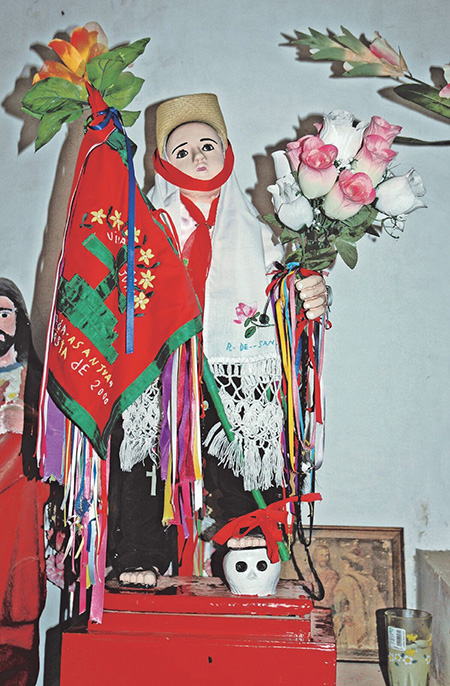 This destruction of precious images took place all over Sonora. In a well-remembered incident on the Río Mayo, Juan Pacheco, local jefe de la policía rural (chief of the rural police), entered the Mayo Indian village of Júpari, removed all the images from the church, and burned them on the nearby riverbank. This was remembered by local Mayos as “when they burned the Little Children”—the saints who are close to the heart of the Mayo sociocosmological structure (Bantjes 1998, 7). As the story goes, the statue of San Juan Bautista escaped by jumping into the river, and Pacheco tried to shoot him. This is a clear instance of what in Mexico is called la ley de fuga (the law of flight), by which a prisoner is shot “while trying to escape.” 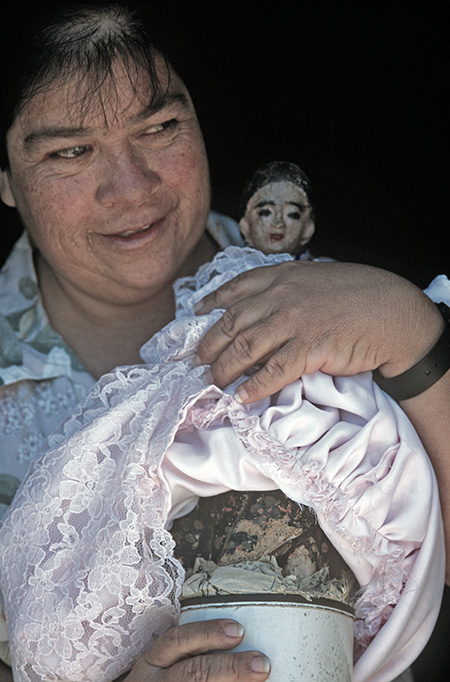 Some images, like the Black Christ of Aconchi, were partially rescued and continue to serve at least some of the community. Here are a few more: A small, badly charred statue of la Virgen de la Candelaria (the Virgin of Candlemas) had been rescued from the burning chapel of the Hacienda de los Tepehuanes, near Álamos. It remains in the possession of doña Etelnidora Gil, in Barrio Zapópan of that city. The statue’s legs and hands were burned off, its arms reduced to charred stumps, and its upper body smoke blackened. Traces of estofado are visible on its singed and blackened skirt. What was left of the body is now held upright by being wedged into an empty tin can. Nevertheless, doña Etelnidora had carefully dressed what was left of the statue, and she handled and smiled at the statue with apparent love—a love that seemed to have little to do with any monetary or aesthetic value the image might possess.

James “Big Jim” Griffith is the author of several books about religious and folk art of the Arizona-Sonora borderlands. In 1974, he co-founded Tucson Meet Yourself Folklife Festival. He is also a founding board member, now board member emeritus, of the Southwest Folklife Alliance.

Bantjes, Adrian, A. 1998. As If Jesus Walked on Earth: Cardenismo, Sonora, and the Mexican Revolution. Wilmington, Del: Scholarly Resources. p 7.

The post San Francisco and the Quemasantos appeared first on Southwest Folklife Alliance.